REQUEST A DEMO
Hit enter to search or ESC to close

Criticality and cruciality are terms that might have been invented to make risk management more confusing. They’re right up there with quantitative and qualitative as an awkward couple!

Monte Carlo simulation is based on the simple idea that you get the best information from experience. If you have run a project a hundred times before you have a much better idea of how long it will take, and how much it will cost. Predict! Risk Analyser pretends to run your project thousands of times, effectively giving you the benefit of hindsight in advance!

Because things happen a bit differently every time you run you project, strange things happen to your schedule. If an activity that has some float goes wrong and uses up all of that float and more, your critical path suddenly becomes very different. So as you run the project in different ways, what you see isn’t just one set of key activities. In fact, you end up with a lot of different critical paths through the project, some more likely than others.

This gives us the Criticality, which is a measure of the likelihood that an activity will be on the critical path. The Criticality is useful because it can alert you to the activities in your schedule that could be critical, even though they aren’t shown as such in a static schedule.

And of course, these items are the activities that, without statistical analysis, will ruin your project, because you will be focusing your efforts on controlling the one ‘critical’ path shown in the schedule!

But criticality, whilst useful, isn’t the whole picture. Some tasks will always be on the critical path, but won’t have any impact on your project. This can be either because they are attached to a milestone, or because they’re on part of a path that is driven by a much larger activity. When you’re building a ship, breaking a bottle on its side to launch it will always be on the critical path, but it won’t hold you up too much if the bottle doesn’t break! A more reliable indicator of where you should focus your efforts is the cruciality. 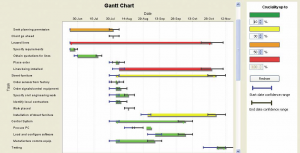 Put simply, cruciality tells you how likely an activity is to influence the outcome of the project. It is a measure of the correlation between the duration of the activity and the duration of the whole project: if the activity goes on longer, how likely is it that the project as a whole will go on longer? Cruciality is the best indicator of where potential problem areas lie, and it is this value that Risk Analyser’s Tornado chart and Gantt charts are based on.

As with any statistical analysis, it is very important to understand the results that you are presented with. There has been a trend recently to multiply cruciality and criticality together to get a third measure, but this should be avoided because cruciality already takes criticality into account: an activity will only affect the duration of the project if it is on the critical path.