Home / Blog / Does risk have a PR problem?

Does risk have a PR problem?

“A ship in harbour is safe, but that is not what ships are built for.” – John A. Shedd, American Author and Professor

‘Risk can help you make the ten best decisions you’ll make this week.’ That’s how Andrew Pyke talks about risk. And how he’d like others to talk about it too. He’s passionate about re-framing discussions to focus on the opportunities associated with risk, to look at its benefits for business and for individuals. 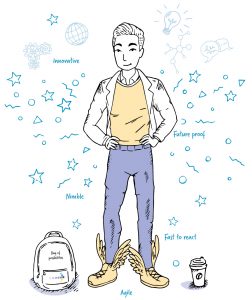 It’s clear from the beginning of talking to our strategic thinkers that there’s plenty of support here for the value that risk can bring to business.

But (there’s always a but…), before we get too carried away on this wave of positivity, risk commentary isn’t always this enthusiastic. Traditionally, discussions around risk cue an awful lot of eye-rolling. Maybe a couple of yawns. Or anxious, knee-jerk questioning about ‘How much is this all going to cost us?’ And little or no discussion about the upsides that risk might bring.

So, our first question is: does risk have a PR problem?

Horst Simon, Risk Culture Builder, agrees ‘Absolutely, most people have only seen the negative side of risk and have focused largely on risk mitigation.’

Certainly, over the past decade, approaches to risk in most businesses have been driven by the focus on compliance. This has led risk to be associated almost solely with problems and cost, and rarely with opportunities.

But risk appears to be a business problem, too, as it’s been marginalised within many organisations – compartmentalised and isolated. Pete Madsen, the lead Partner, Advisory at Bentleys SA Pty Ltd, explains:

“Risk has often been seen as the responsibility of the risk function alone. Too many senior executives just haven’t been interested in operational risk, in particular – they say ‘The project guys can sort it’”.

But is senior management alone to blame for this negative approach to risk? Not at all, says Pyke, who argues that risk managers have an equal responsibility for this state of affairs. “Discussions around risk by risk managers were frequently depressing, scary or boring. Tedious doesn’t inspire and boring doesn’t sell!”

So, perhaps it’s not surprising that senior management hasn’t traditionally been inspired to focus on risk if they haven’t been incentivised enough or shown the bigger picture about how risk affects them.

A shift in perception is needed. Pyke comments: “We need to change the narrative from ‘Here’s another bad project’ to ‘Here are some phenomenal people taking on one of our biggest challenges.”. “A change to focusing on the win, not just on the loss.”

The good news is that we are seeing some vibrant green shoots arising amongst the nettles and the thorns of risk.

A new type of leader is emerging who’s changing the way organisations and their employees view risk.

A leader who understands that risk brings immense opportunities for business today, who inspires others to approach it in a whole new way. A leader who, as Simon puts it, gets that “risk is reward”. In fact, for many, without risk, there is no reward.

Why here? Why now?

The rate of change and innovation in our world is accelerating faster than ever. Increased uncertainty, globalisation and complexity all mean that the old ways of staying ahead of the competition just aren’t cutting it anymore.

In this changing and disrupted landscape, we need new tools and approaches that are future-proof and remain relevant – like a box of Lego blocks that we can adapt to suit different futures. Bradley explains:

“There’s disruption in so many sectors of business which are driving awareness that the status quo doesn’t guarantee long term success. There’s no other option than to become risk-intelligent if you want to thrive as a leader and thrive as an organisation.”

It’s not just a top-down approach from leadership that appears to be effecting a shift in risk perception – there’s also a bottom-up driving force. Alvaro Medina, Chief Risk Officer at OHL Group, clarifies, ‘Younger people really understand the benefits of using risk to be more competitive.’ They may also be more likely to take risks to prove themselves, as they’ve been used to growing up in a disruptive world. They have less expectation of remaining with the status quo.

Less and less, it seems, are we hearing ‘Well we tried that 20 years ago and it didn’t work’ in the face of new strategies or projects – it’s about asking what we can do differently.

Risk-Intelligent Leaders are clearly starting to play a starring role in driving new attitudes and approaches to risk. So, what makes them tick?